Our son served in the US Army and after concluding his three-year stint, he enrolled at BIOLA University, an excellent Christian University in Los Angeles.

We were very enthusiastic, cheerful supporters. We found out what books he needed for his first semester and bought all of them. It was a lot of money. We had no idea that the GI bill not only covered his tuition, but his books as well.

When Caleb found that out, he bought his books through the GI bill. We asked what he did with the books we bought…..it was a lot of money. He told us he gave them to another student who was really strapped financially.

Our good and loving Father God continuously and generously pours His grace into our life. He also promises that when we give of ourselves, He'll provide an abundance of the resources we need for the work He has called us to do (2 Corinthians 9:8).

The Lord wants us to give freely. The more aware we are of God’s grace, the freer we are to give generously, extending to others the kind of grace God has given us:

Each of you should give what you have decided in your heart to give, not reluctantly or under compulsion, for God loves a cheerful giver. (v. 7 NIV)

As Paul implied here and as we saw in Matthew 6 in an earlier blog, giving is a matter of the heart. Once we’ve determined what God wants us to give, we are to make our contribution cheerfully, for God loves a cheerful giver.

The word cheerful in Greek is the source of our word hilarious. Giving is to be a source of joy and delight for us.

And heartfelt giving is giving without any sense of obligation or reluctance. Furthermore, the act of giving is a sacrifice that pleases God. I will never forget a very special offering that was given with joy and truly glorified God.

When my wife and I were in Southwestern, Uganda, we had the pleasure of attending an infant baptism. Jethro was the little boy, and he was the largest baby I had ever held—and he still holds the record. When he was nine months old, he must have weighed thirty pounds.

His mom told us Jethro outweighed his two-year-old sister, Jael. We were excited to be at his christening, and since I come from a believer-baptism tradition, I found it particularly interesting.

At the end of the service, the pastor announced that the offering would be taken. In the Ugandan church tradition, the offering is a way of honoring the baby, and the parents are expected to give a gift as well. When the pastor started praying to receive the offering, I saw Jethro’s mother sneak out of the sanctuary.

The pastor said, “Amen,” and the deacons began passing the baskets along the rows. After collecting the baskets, the men walked to the front of the church. As they did, they were joined by the mother pulling a goat on a rope.

The four deacons with baskets and the mother with goat stood at the altar in front of the pastor as he prayed and accepted the offering, goat included. The pastor was praying, the goat was bleating, and I knew we weren’t in Kansas anymore.

Afterward, at the celebration banquet, the word went around that the goat had sold for $75, and in Uganda that’s a lot of money. Jethro was honored, God was worshipped, and the gift of the goat had been cheerfully and generously given. God was pleased!

This kind of cheerful generosity occurs when we live a God-centered life, free from dependence on self and fully dependent on Him. 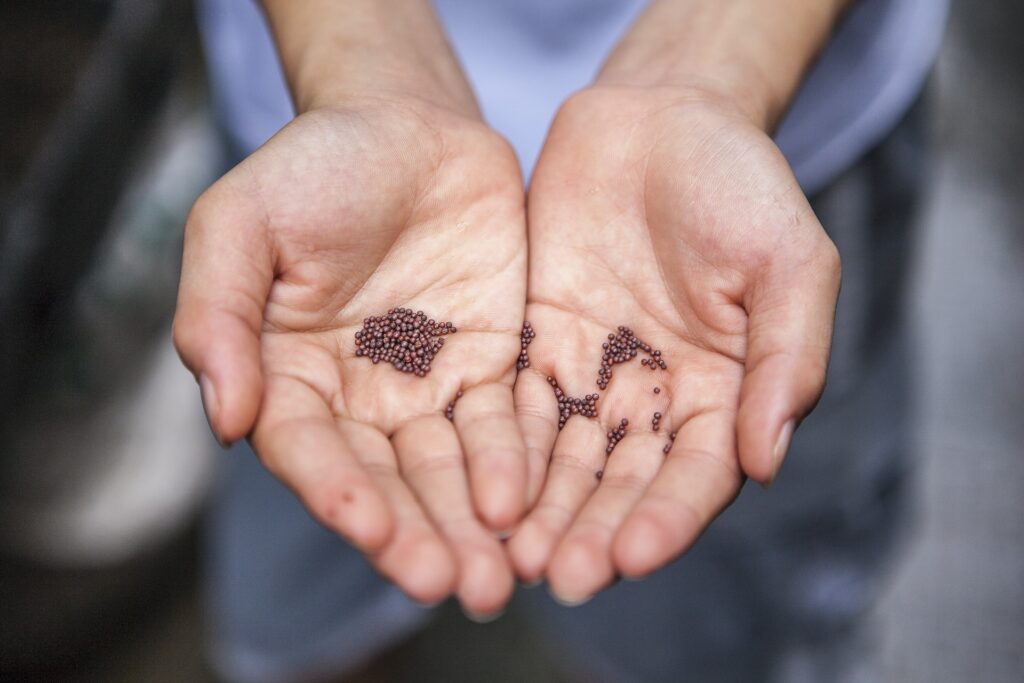 Quoting Psalm 112:9, Paul noted that we are more able to give cheerfully and generously when we are living a God-dependent life as opposed to a self-sufficient one:

As it is written: "They have freely scattered their gifts to the poor; their righteousness endures forever." Now he who supplies seed to the sower and bread for food will also supply and increase your store of seed and will enlarge the harvest of your righteousness. (2 Corinthians 9:9-10 NIV)

Like the farmer, the generous giver depends on God from start to finish. God supplies the seed, soil, water, sunshine, harvest, and the means to make wheat or barley into bread. Paul’s reference to Psalm 112:9 reminded God’s people that He is faithful to individuals who fear Him and who, in obedience and with confidence, give generously to the church and ministries.

In the same way that our faithful God is in control of the process from seed to bread, He is in control of our financial gifts and our world according to His purposes. Generous givers recognize their dependence on God.

The reference to harvest of your righteousness (2 Corinthians 9: 10 NIV) alludes to Hosea 10:12. In that passage God was urging the Israelites to return to the Lord and sow righteousness that would lead to the harvest of God showering them with His righteousness. (Yes, I mixed metaphors.)

Paul saw the Corinthians’ generous and cheerful giving to the Jerusalem offering as an act of righteousness that God would bless.

Author of The Pilgrim’s Progress, John Bunyan wrote, "A man there was, and they called him mad; the more he gave, the more he had."

Of course, Bunyan was writing about a believing and faithful Christian. To the world such a principle of giving is nonsense, but Paul knew it as a reality of the Christian life.

In addition to learning from what Paul wrote, we also do well to observe what Paul did not say. He did not say that wealth or surplus income is a sign of God's blessing. Nor is it the giving per se that is applauded.

Rather, Paul was commending a lifestyle of generosity. For those who give cheerfully and willingly, the promise is that God will provide all they need to continue doing good.

We can be certain that God will continue to provide for us in all ways as we express our love for Him in generous giving.